The Legal Guide to NFA Firearms

Keeping Safe at the Range and in the Courtroom

About the Authors and Editor:

Sean is an attorney in private practice in Tyler, Texas with over 23 years’ experience in civil litigation, business law, and firearms matters. He is also an NRA-Certified Instructor and Training Counselor, and a nationally-trained instructor for Texas 4-H Shooting Sports.

Alan is an attorney in private practice in Clearwater, Florida with over 33 years' experience at estate planning. He is also a prolific author and speaker.

Jonathan is a Principal in ILS Management, LLC and a retired member of Milbank Tweed Hadley & McCloy LLP in New York, NY, and a member of the Alaska, California and New York Bars. He is recognized as one of the most creative trusts and estates lawyers in the country and is listed in The Best Lawyers in America. He has written and lectured extensively on estate and trust taxation and charitable giving.

Ken is an attorney in private practice in Clearwater, Florida, specializing in estate planning, health law, and business law. He is board-certified in tax law.

Travis is an attorney in private practice in Clearwater, Florida.

Seaver is an attorney in private practice in Clearwater, Florida, having earned his J.D. from Florida Coastal School of Law, and his MBA from Jacksonville University. 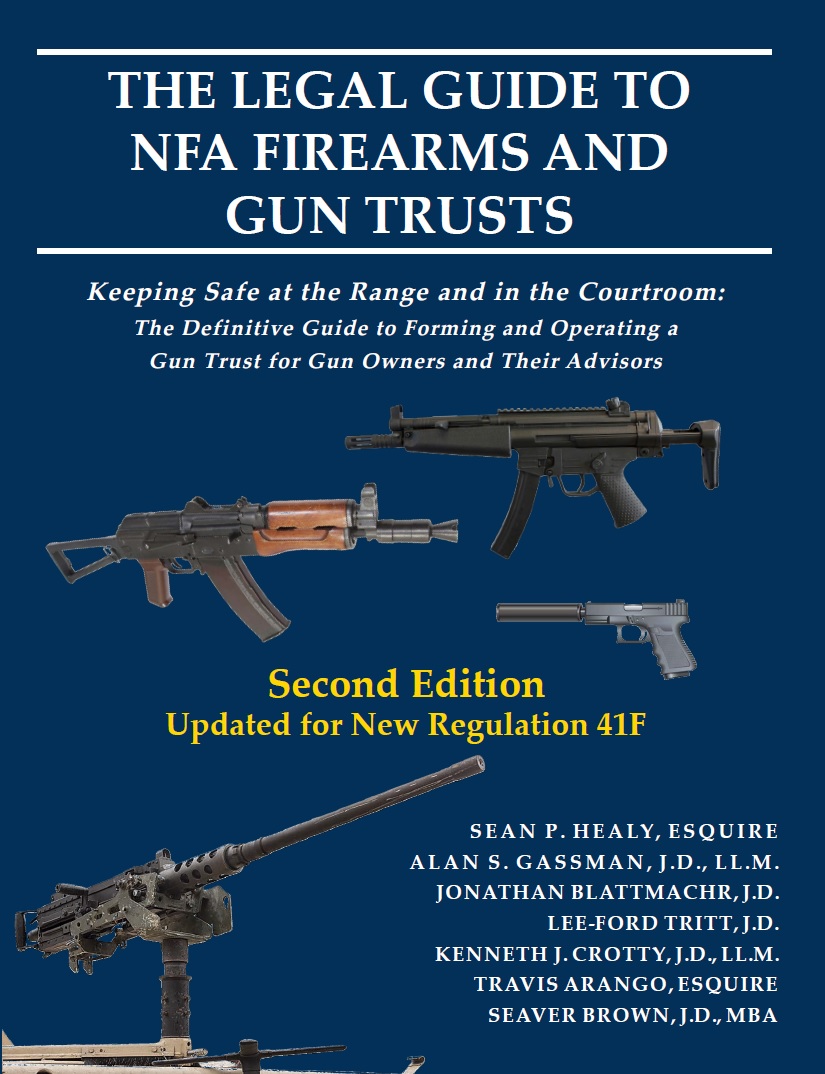 Endorsements of the Book:

Massad Ayoob, world’s top self-defense expert, trainer, author: "NFA trusts are The Hot Thing among sophisticated gun enthusiasts and collectors. The smart ones go to lawyers to draw them up...and the lawyers go to Sean Healy, Esq. to learn. Having seen him teach this to his brother and sister attorneys I consider him the best in the business. His new book on the topic is priceless not only to lawyers entering this niche of practice, but to the individuals seeking the trusts. Sean and his team have not only nailed the details, but written them in such a way that a lay person can grasp the critical subtleties involved."

Stephen Halbrook, attorney for NRA, argued every significant gun case in Supreme Court, prolific author: “The Legal Guide to NFA Firearms and Gun Trusts is a must-reference work for attorneys who draft trusts for clients wishing to acquire machineguns, suppressors, and other NFA firearms.  Laypersons may also benefit from the work, which trudges through the labyrinth of ATF regulations in search of the Holy Grail of trust ownership of NFA firearms.”

Robert A. Waters, author of The Best Defense: True Stories of Intended Victims Who Defended Themselves with a Firearm: "After recent terrorist attacks in America, several sheriffs and police chiefs have asked civilian gun-owners to form the front line of defense in case of future attacks.  And while the voices of those who wish to restrict guns have increased in volume, gun ownership has skyrocketed. A new book, The Legal Guide to NFA Firearms and Gun Trusts by Sean Healy and several co-authors, will help keep those who legally possess machine guns, suppressors, and other regulated weapons free of legal repercussions. One way is to place such weapons in a living trust.  These authors, all attorneys, recommend specific strategies for maintaining such weapons legally. I highly recommend this important book."

Chris Bird, author of Thank God I Had a Gun: “The Legal Guide to NFA Firearms and Gun Trusts is not light reading. It is however readable and understandable to a non lawyer like me. NFA is the National Firearms Act which was passed in 1934 to discourage ownership of machine guns by imposing a $200 tax on any transfer of such weapons. It also applies to short barreled rifles and shotguns and to suppressors. That $200 tax was the equivalent of $3,500 in today's dollars. Now the $200 tax is much less impediment than the cost of machineguns. Ordinary citizens are prohibited from owning any machinegun that was not registered with the federal government in 1986. This has reduced the supply of machineguns to the point where a 30-year-old M-16 is worth $25,000 or 25 times what it would cost but for government regulation. As I read the book, I am reminded how tyrannical gun control laws are in this country. It apparently is not a requirement that you intended to break the law to become a federal felon. What ever happened to mens rea or guilty mind being necessary for conviction of a crime? A gun trust is probably a good thing for ownership of fully-automatic weapons. But whether you own a machinegun or suppressor through a trust or as an individual, you do need a lawyer from your state who specializes in these things. He or she needs this book and so do you.”